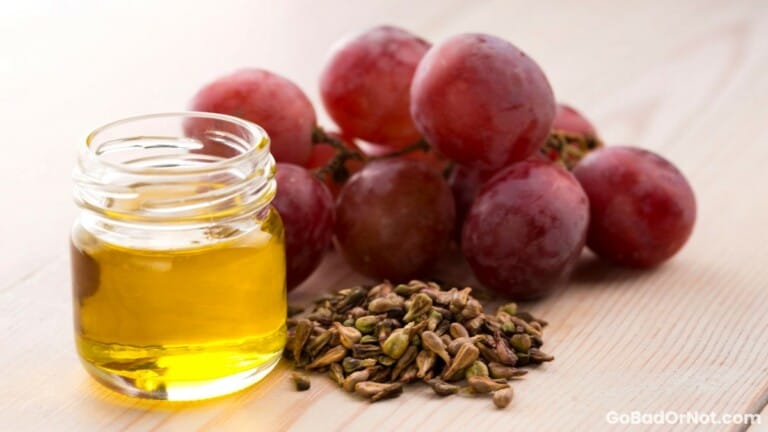 Grapeseed oil is a useful cooking oil that brings a mild, nutty flavor to dishes. This oil can be refrigerated and is a versatile choice for kitchens, leading to its growth in popularity.

Here’s the deal: Even though it has a relatively long shelf life, grapeseed oil, like all liquid fats, can go bad.

What Is Grapeseed Oil?

Grapeseed oil is a type of vegetable oil extracted from the seeds of grapes and can be used in cooking and baking. Grape seeds are byproducts of the winemaking process and only generate a small amount of oil, making grape seed oil relatively expensive.

Grapeseed oil has grown in popularity, as it is viewed as a healthy alternative to other forms of vegetable oils. It contains high amounts of vitamin E and polyunsaturated fat, living up to its health claims.

Grapeseed oil has a comparable shelf life to other cooking oils and can often last for up to a year. Its packaging will often include a “use by” date, though if stored correctly, grapeseed oil can be made to last for longer.

Extended shelf life for grapeseed oil begins in the grocery store. Look for bottles that have a dark color. This will help prevent light exposure, extending your grapeseed oil’s life.

In addition, select a bottle that is made of glass. Avoiding plastic will ensure chemical components are not leached into your oil.

Grapeseed oil can be stored like other cooking oils, such as olive oil or peanut oil. Cooking oils should be stored in a cold, dark location, such as a pantry.

Grapeseed oil should not come in contact with direct light or moisture, as this will change the consistency and quality of the oil.

As well as being stored in a cool, dark location, grapeseed oil should be kept at a consistent temperature. Fluctuations in temperature can cause the oil to degrade faster and lose its quality.

When opened, the container holding the grapeseed oil should be sealed tightly, or else it could become exposed to moisture and air.

Fun fact: unlike many other types of oils, grapeseed oil does not congeal or get cloudy when refrigerated. This makes it a useful oil alternative in dressings or condiments that require refrigeration.

Refrigerating grapeseed oil can extend its shelf life by several months, making it last even up to a year. Once grapeseed oil has been refrigerated, it should remain at a cooler temperature. Moving it back to room temperature storage will affect its consistency and cause it to spoil faster.

Has This Grapeseed Oil Gone Bad?

If you have had the same bottle of grapeseed oil for many months, perhaps even more than a year, you may find yourself wondering if it is still okay to use.

Oils typically do not develop mold or spoil in a visible sense, but they can go rancid. Rancidity occurs during a chemical reaction causing fat molecules to break down.

An oil that has gone rancid may not be unhealthy to consume; however, it will change its taste and can ruin the flavor of your meal. When oil goes rancid, it loses much of its nutritional value, such as the vitamin E found in grapeseed oil.

You should smell the oil to determine if your grapeseed oil has gone rancid. If it smells abnormal, it should be discarded. Rancid oils can smell metallic, bitter, or soapy.

Oils will go rancid far quicker when exposed to direct light or air. This is why proper storage techniques are so important.

Grapeseed is a versatile cooking oil that is used well in items requiring refrigeration. When stored correctly, grapeseed oil will continue its usefulness in dishes for up to a year, making it a grape addition to your kitchen.